The Secret Paris of the 1930s: Vintage Photographs by Brassaï 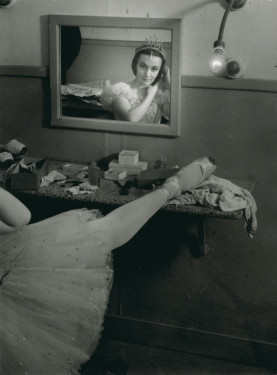 Early 20th century Paris was the setting for one of the great flowerings that have periodically punctuated the history of photography. As with painting and sculpture, ambitious young photographers from around the world flocked to between-the-wars Paris, where they formed a fertile artistic milieu. Among them was Brassaï (Gyula Halász, 1899-1984), whose evocative, inky-black, and very rare, vintage photographs of night-time Paris are assembled into this exhibition.
After attending art school in Berlin, Brassaï moved to Paris in 1924, and stayed for good. Born Gyula Halász, he adopted the nom de plume Brassaï from his birthplace, Brasso, a Hungarian (now Romanian) town in the Transylvanian region. A gifted sculptor and sketch artist, he learned the technical aspects of photography from his fellow Hungarian-in-Paris André Kertész, but the two artists’ subject matter could not have been more different. In contrast to Kertész’s cool compositions and meticulous still lifes, Brassaï focused on Paris’s crepuscular demimonde, which he explored compulsively from the first moment of his arrival. Sometimes alone, sometimes accompanied by friends like the writers Henry Miller or Jacques Prévert, Brassaï witnessed aspects of Parisian night life that the cerebral Kertész would never imagine.
The vintage prints on display are drawn from the private collection of Michael Mattis and Judith Hochberg.

This exhibition was organized by art2art Circulating Exhibitions. Photographs copyright the Brassaï Estate. All works are from the collection of Michael Mattis and Judith Hochberg.

The  Hagerstown presentation has been generously supported by gifts from: