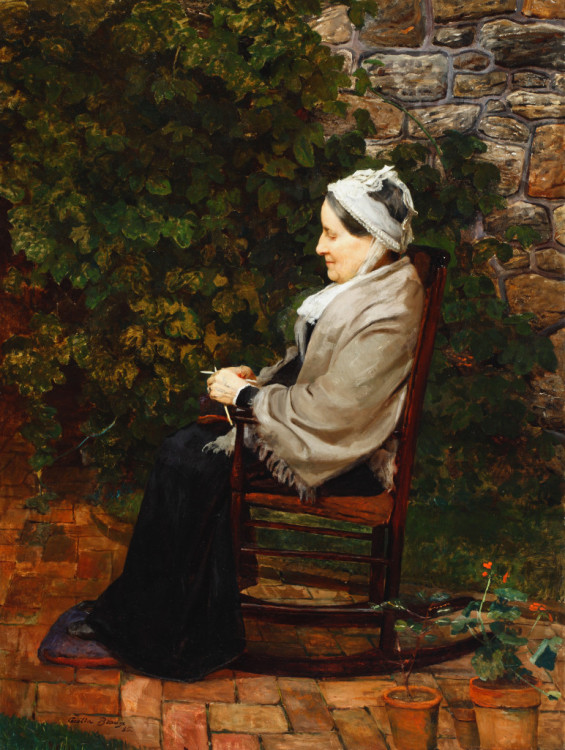 Editor’s note: The date of the painting’s last day on display has been changed to Dec. 6. The release below reflects that information.

While most women her age were getting married and having children, Beaux defied the conventions of the Victoria era to focus on her work. Her hard work and tenacity paid off as Beaux (1855-1942) is recognized as one of the most significant American women portraitists of her generation.

Washington County Museum of Fine Arts visitors have a limited opportunity to see her painting, Mrs. John Wheeler Leavitt (Cecilia Kent), 1885, while it is on loan from the Westmoreland Museum of American Art in Greensburg, Pennsylvania. The painting will be on display through December 6.

In the painting Mrs. Leavitt looks down reflectively, pausing for a moment in her knitting. Note the large leaves of the bush are yellowing and the spindly geraniums in the clay pots suggest autumn is on the way; appropriate metaphors for passing time suit the subject of the painting.

Leavitt’s profile pose and choice of chair recall the renowned portrait by James McNeill Whistler,  Arrangement in Grey and Black No. I: Portrait of the Artists’s Mother (1871), indicated that Beaux no doubt studied this work closely. At the same time, Beaux’s interest in the human psyche and use of a dark monochromatic palette reflect the objective, realist style associated with the American artist Thomas Eakins.

Beaux was a student of William Sartain, (whose work can be seen nearby at the museum) at the Pennsylvania Academy of the Fine Arts (PAFA), Philadelphia. She later rivaled John Singer Sargent (a year her junior) with the straightforward portraits of high-society figures she became known for after moving to New York in 1900. She rarely flattered her sitters, instead, she captured aspects of their inner character.

Beaux became the first full-time female faculty member at the PAFA, where she taught from 1895‒1916. In 1924, she was commissioned by the Uffizi Gallery, Florence, to paint her self-portrait for its collection, the first American woman to earn this distinction.

Come see Beaux’s Mrs. John Wheeler Leavitt while it is on display, and learn more about this artist and her connections to works in the Washington County Museum of Fine Arts’ collection.