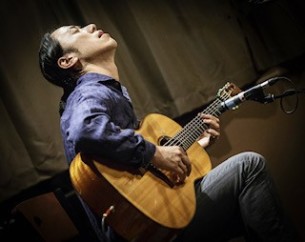 Hiroya Tsukamoto is an innovative acoustic guitarist and composer. Born and raised in Japan, in 2000 he received a scholarship to Berklee College of music and came to the U.S.

Tsukamoto’s instrumental abilities are indeed breathtaking and astounding, but his performances are so much more than that.  He has the unique capability of engaging an audience thru a personable and genuine approach that transfixes his audience and almost transcends his capabilities as a guitarist. Audience members will be mesmerized; Tsukamoto plays with effortless skill on the guitar and he will share different compositions inspired by lands, forests and cultures.