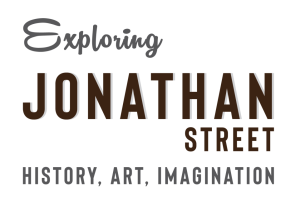 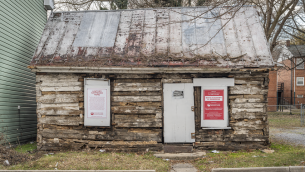 – When a police cruiser crashed into a home at 417 Jonathan St. on a wet day in 2018, the accident exposed a piece of long-forgotten history in the historically Black neighborhood.

Hidden underneath layers of vinyl siding were hand-hewn timbers at least 200 years old revealing a log cabin. What had started as a demolition of the condemned building turned into the preservation of the home and excavation that uncovered pieces of the past.

Sometimes called “the little cabin that could,” 417 Jonathan Street, constructed from 1839‒41, has attained emblematic status as a symbol of both the rich cultural heritage of the neighborhood and the value we can find in that history to help foster a stronger community in the present and future.

Providing an immersive, thoughtful exploration of the cabin’s story, Exploring Jonathan Street features archaeological objects excavated from the cabin site (most of which the community has only seen in photographs), enlarged documentary photographs of the cabin’s historical condition and works from the Washington County Museum of Fine Arts’ collection.

The exhibition uses these materials to explore the history of Hagerstown’s traditionally Black Jonathan Street neighborhood from the early 1800s to the present. Hagerstown’s own nationally-known artist GraffDummy (Quielan Gantt) has been commissioned to create a contemporary artwork inspired by the research completed at the cabin site and the powerful history of the neighborhood where he spent part of his youth.

In conjunction with the exhibition, WCMFA is hosting a Juneteenth Community Day, Sunday, June 19 from 1 to 5 p.m. at the museum. Juneteenth commemorates the emancipation of enslaved Blacks in the United States, the museum plans to mark the occasion with a free, fun-filled, family day.

Through the collaborative efforts of colleagues at Preservation Maryland, Maryland Archaeological Conservation Lab, Maryland Department of Transportation, State Highway Administration (MDOT SHA), archaeologists, and community members, Jonathan Street’s rich legacy is actively being researched, preserved, and shared. This exhibition is by no means an exhaustive community history, but instead a step along the way to further exploring, documenting, researching, publishing, and talking about this unique, vital, and historically important part of Hagerstown’s past, present, and future.

A PEEK AT THE COLLECTION

There are more than 100 pieces in Exploring Jonathan Street: History, Art, Imagination. Here is just a sampling of what visitors can see during the show’s run.

F. Hoyt’s German Cologne bottle (Philadelphia) was often worn for good luck, particularly by members of the Black community, during the 19th and 20th centuries. It is still available for sale today!

This pierced disc was likely used to ward off evil and bad luck. The pierced metal disc is the size and thickness of a silver dime and might have been worn by the occupants of the cabin or placed at the cabin’s entrance and used as a talisman. Traditionally, pierced coins and metal discs were used by free and enslaved Blacks in Virginia and Maryland. These artifacts have often been excavated in caches or bundles under or near doors and hearths, but they might also have been worn on the body or carried 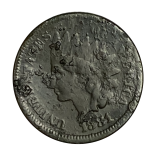 U.S. Chief Mint engraver John B. Longacre was the designer of both the obverse and reverse of the “Indian Head cent.” His design was put into production in 1859 and continued to be minted until 1909. The “Indian Head” penny was later replaced by the Lincoln Wheat cent toward the end of 1909.