To mark today’s Harvest Moon, we hope that you enjoy this painting in our collection. If you visit the museum, we invite you to see this work, which is on view in the Kerstein Gallery installation, The Eight to Abstraction: Modernism and Innovation. 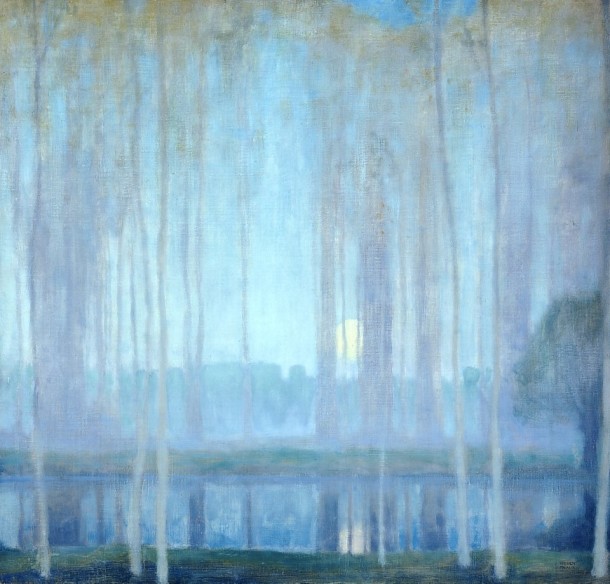 Edward Steichen (American, b. Luxembourg, 1879–1973)
Yellow Moon, 1909
Oil on canvas
24″h x 25.25″w
Collection of Washington County Museum of Fine Arts
Gift of Mrs. Conger Goodyear, A0736,53.0003
Edward Steichen is best known today as a photographer, but for twenty years he divided his creative work between photography and painting. Yellow Moon is a rare survivor from those early years of painting. Steichen began his artistic career as an apprentice lithographer in Milwaukee, Wisconsin. As a teenager, he started drawing and taking photographs for advertisements. After hours, Steichen and some friends started a painting class taught by local artists. Steichen often rode the streetcar out of town to paint and photograph, explaining, “The romantic and mysterious quality of moonlight, the lyric aspect of nature made the strongest appeal to me.” His paintings and photographs of woodland landscapes, often seen in moonlight, were atmospheric studies in mood rather than detailed depictions of sites.

In Yellow Moon, Steichen created a poetic, dreamy nocturnal impression of a grove, the colors of which convey a sense of coolness and introspection. This painting provides an intriguing comparison with his early outdoor photographs such as The Pond—Moonlight (1904, see below), in which he established a remarkable, diaphanous luminescence. As the artist described, “…I knew of course, that trees and plants had roots, stems, bark, branches, and foliage that reached up toward the light. But I was coming to realize that the real magician was light itself—mysterious and ever-changing light with its accompanying shadow rich and full of mystery.”

Traumatic experiences during World War I caused Steichen to abandon painting as unsuited to the harsh postwar world. In 1922, in his garden at Voulangis, France, he burned all of his paintings. Only those that had already left his hands, like Yellow Moon, survive. Thereafter, Steichen devoted himself exclusively to photography. He earned a stellar reputation as a portraitist and commercial photographer, as well as a creative modernist and curator.