James Dixon Roman once saved Hagerstown during the Civil War

To mark the exhibition, Exploring Jonathan Street: History, Art, Imagination (May 21‒September 11, 2022), we hope that you enjoy this portrait in our collection. If you visit the museum, this work is on display in the Bowman Gallery. 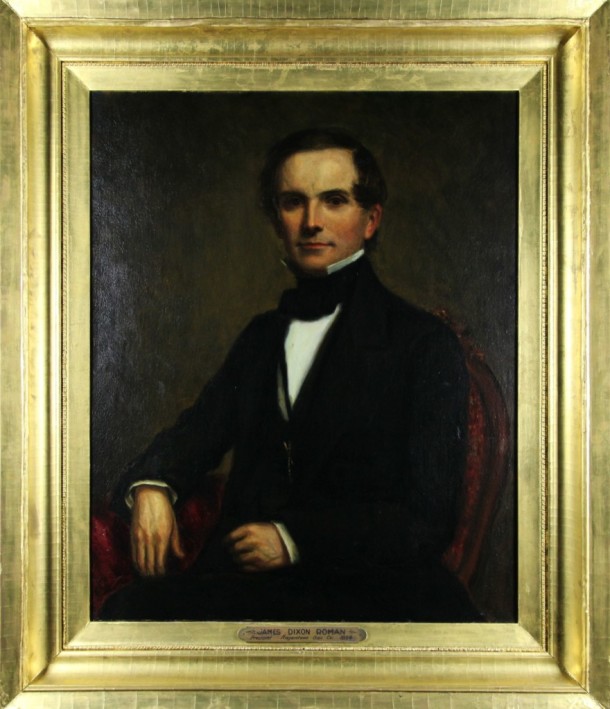 Attorney and politician James Dixon Roman (1809-1867) gazes directly at the viewer with a facial expression and posture that convey poise, confidence, and dignity in this mid-19th-century portrait. While the artist is unknown, the painter demonstrated an understanding of pictorial conventions and might have been familiar with the work of mid-19th-century portraitists active in Maryland such as Alfred Jacob Miller and Oliver Tarbell Eddy.

James Dixon Roman was born in Chester County, Pennsylvania, and came to Maryland to read law with his uncle, James Dixon of Frederick. After being admitted to the Bar, he settled in Hagerstown and was elected to Congress by the Whigs in 1847. Dixon was a Presidential Elector on the Taylor, Fillmore and Buchanan tickets. During the Civil War, as President of the Hagerstown Bank (a position he held until his death), he became renowned for negotiating with Confederate General John McCausland over the ransom of Hagerstown, in which the Bank put up half the money demanded by the Confederates. Later, Roman also served as President of the Hagerstown Gas Company, as shown on the plaque of the picture frame (see below).

Roman is sometimes characterized as a southern sympathizer, but recent research has shown that this was not likely the case. Roman, through family relations, assisted Blacks from the Jonathan Street community in a variety of ways. Most notably, he participated in a deed of trust (April 1851) between Benjamin Pendleton and Rachel Lyles that protected enslaved people from being sold. As the husband of one of abolitionist Henry O. Wagoner’s cousins, Roman helped John A. (possibly one of Henry’s brothers or other relatives) and Emily Wagoner purchase property in the Jonathan Street neighborhood (Lots 306, 307, 309). In addition, when hotel owner John Wagoner began his Civil War military service in 1861, Roman arranged for the security of John’s wife and children through a deed that protected all of his property and his family during his absence.

Plaque on picture frame showing that Roman was
President of the Hagerstown Gas Co. in 1854.