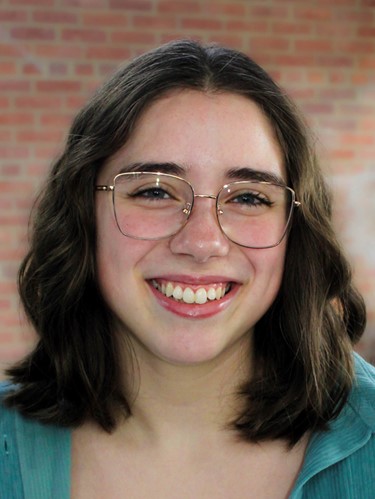 The program brings “WCPS students and employers together to create skilled labor through education, mentorship, and on-the-job training and gives students an edge in today’s ever-changing job market,” according to WCPS Youth Apprenticeship.

Salomeh, 16, a junior at Boonsboro High School, will learn about marketing and communications while in the program. Over the span of two years, she must clock in a minimum of 450 hours before she graduates high school. Once completed, she will receive a Maryland State Skill Certificate. During her apprenticeship, Salomeh is paid and also can earn up to 4 credit hours.

When Salomeh saw the flyer at her school about the apprenticeship, she said she knew she wanted to apply.

“Being able to help with photography and videography is something I’m so grateful for because I want to be in that profession when I’m older,” she said. “With marketing, I was excited because now I could put my artistic input on something for the public.”

As part of Salomeh’s duties, she will be assisting Director of Marketing and Communications Crystal Schelle and learn all aspects of marketing including video and photography, social media and ad design.

“I love video and photography because as the one being behind the camera, I am able to capture thoughts and feelings without having to explain or say them,” she said. “I love being able to express how I’m feeling through pictures and actors and actresses, so the viewers get that same feeling and understand where my vision went.”

Salomeh was excited to be chosen for the apprenticeship at the Washington County Museum of Fine Arts because her favorite thing to do is create art with video.

“Anything art-based I love; however, if I had to pick a favorite it would be filming,” she said. “I started my first short film this past summer, and it was one of the most amazing experiences. I was able to direct, write, and start editing this film by myself. When I went through with the production, I knew that this was something I wanted to do in my future.”

With less than a month under her belt, Salomeh has already taken photos and video reels for several museum-hosted events such as the Treasure Sale and the recent Thomas Pandolfi concert. Her work has been published on the museum’s social media pages.

She said what she enjoyed about working the events “was being able to go around and snap pictures and videos of people just interacting. It was great being able to edit and get feedback on my work. Having a mentor in something I have a passion for is amazing and I’m so grateful.”

When she’s not at the museum, Salomeh is involved in show choir at Boonsboro High.

“Show choir is amazing we all come together like one big family and performing with them is one of my favorite things to do,” she said.

After she graduates high school, Salomeh plans to major in film in college.

“I would also love to build a social media platform for myself to share the videos/films I make and be an entertainment source for many,” she said.

Salomeh said she is excited for the opportunity the Youth Apprenticeship has given her.

“I can’t wait to continue working at the museum and learn many new things that I can carry on in my career,” she said.