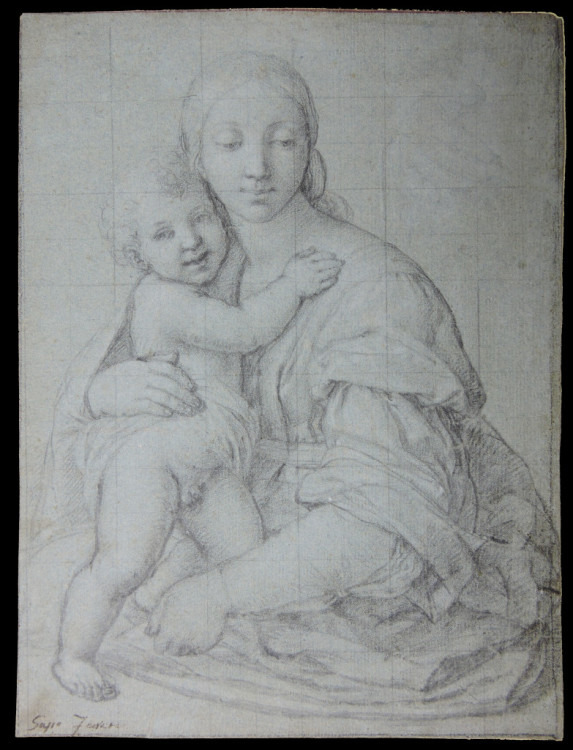 HAGERSTOWN, Md. – A rare Baroque painting discovered to be stolen from the holdings of a German collection nearly 60 years ago is being returned, thanks to the Washington County Museum of Fine Arts.

Visitors to the Hagerstown museum will have a chance to see the drawing on display until it is returned overseas.

In December 2021, Madonna and Child (ca. 1650) by Italian artist Sassoferrato was donated to the Washington County Museum of Fine Arts from the collection of Dr. John and Sylvia O’Brien.

But unbeknown to the O’Briens, the drawing had been stolen in 1965 from Staatliche Graphische Sammlung (State Graphic Collection) in Munich. To this day, the theft remains unsolved.

THE ARTIST
Born Giovanni Battista Salvi (1609–1685), the artist took his name Sassoferrato from his birthplace, a small town between Florence and Rome. He first began his art education under his father, Tarquinio Salvi, a painter about whom very little is known. Sassoferrato made a specialty of creating beautiful devotional images for private patrons — often images of the Madonna and Child or images of the Madonna in prayer.

Sassoferrato‘s drawings are relatively rare, and most of those known are in the Royal Collection at Windsor Castle. They were purchased in Rome in 1768 by Richard Dalton, librarian to George III and an adviser on the formation of the king’s drawing collection. Sassoferrato’s Madonna and Child (ca. 1650) is the study for the final oil painting of the same subject in the Borghese Gallery, Rome.

Sassoferrato was known to often directly derive his compositions from the work of the Renaissance master Raphael. In this case, his drawing is based on Raphael’s Madonna & Child (c. 1509), now in the National Gallery London, sometimes called the Mackintosh Madonna.

THE CRIME
A student conducting research at State Graphic Collection on August 13, 1965, noticed that a drawing had been torn from a base box and stolen. That missing drawing was Sassoferrato’s Madonna and Child.
After examining their inventory of Italian drawings, the Graphic Collection contacted Munich police. According to a report from the Munich Public Prosecutor’s office, by August 19, 1965, all leads had been exhausted and the thief could not be determined, so the investigation was closed.

THE REDISCOVERY
While researching Sassoferrato’s Madonna and Child, the museum’s Agnita M. Stine Schreiber Curator Daniel Fulco, discovered that the drawing recently given to the museum was likely the missing drawing from Munich. He made this determination after seeing a black and white photograph of the drawing reproduced in an exhibition catalogue on the artist.

After comparing the drawing with the one in the catalogue, Fulco consulted Executive Director Sarah J. Hall, and Collections Registrar and Exhibitions Coordinator Sarah Wolfe. It was clear that many aspects of the photograph matched up line for line with the drawing in the museum’s custody, although the thief had made alterations to the drawing to disguise its original appearance for sale on the black market.

With these findings, the museum reached out to the FBI for guidance and contacted its colleagues at the Graphic Collection in Munich who confirmed the theft of the drawing and provided documentation of previous ownership. Having gathered this evidence, the museum deaccessioned the work (officially removed it from the collection) in preparation for its return to Munich.

“Our museum greatly appreciates the conscientiousness given to the drawing by the Washington County Museum of Fine Arts in acquiring it. This attentiveness made it possible to identify the sheet as the one that had been stolen from the holdings of the Graphische Sammlung in 1965 and has been sorely missed ever since,” said Dr. Michael Hering, director of State Graphic Collection in Munich.

THE RETURN
Following the conclusion of this feature exhibition, the drawing will return home to Munich, where it will be reunited with the Graphic Collection after its long absence. The Graphic Collection, with holdings of more than 400,000 drawings, engravings and prints, is considered one of the most important collections of its kind in Germany.

“While I will definitely feel a pang of loss when we pack the drawing up to return it to Munich, I’m proud of the curatorial research that allowed us to send this drawing home, and I am appreciative of the time we have had to enjoy this beautiful drawing first hand, Please stop by the museum and see it over the next few weeks while we have it on display,” said Sarah J. Hall, director of the Washington County Museum of Fine Arts.

Hering thanked the Washington County Museum of Fine Arts for its willingness to transfer the work, especially for a piece believed to be “lost forever.”

“It is very fortunate and encouraging that an exchange between museums on different continents can be conducted in such a collegial manner,” he said.

Sassoferrato’s Madonna and Child will be on display at the museum throughout August.